Welcome to our support

The Invitees Grid is where you can start importing your guest lists in the system so that an invitation email can be sent to them in order to attend your event. 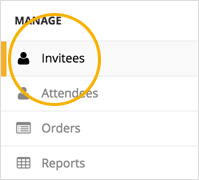 **Above image illustrates where to locate Invitees Module in the backend

Importing Invitees in the system

If you don't have any invitee, you will see the following screen: 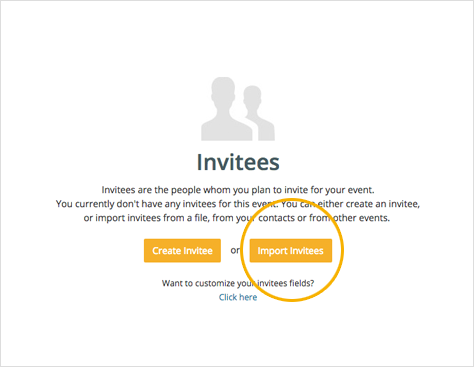 If you already have invitees in the system, you will see then the invitees grid: 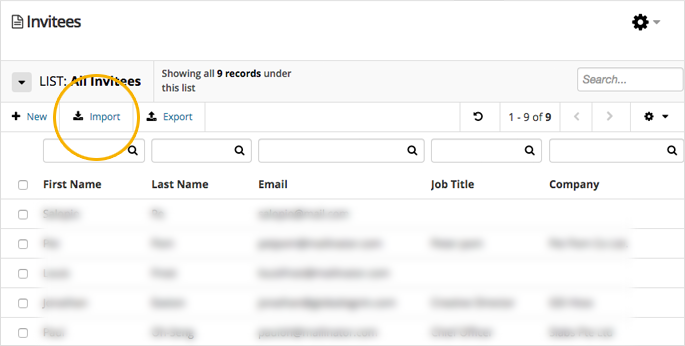 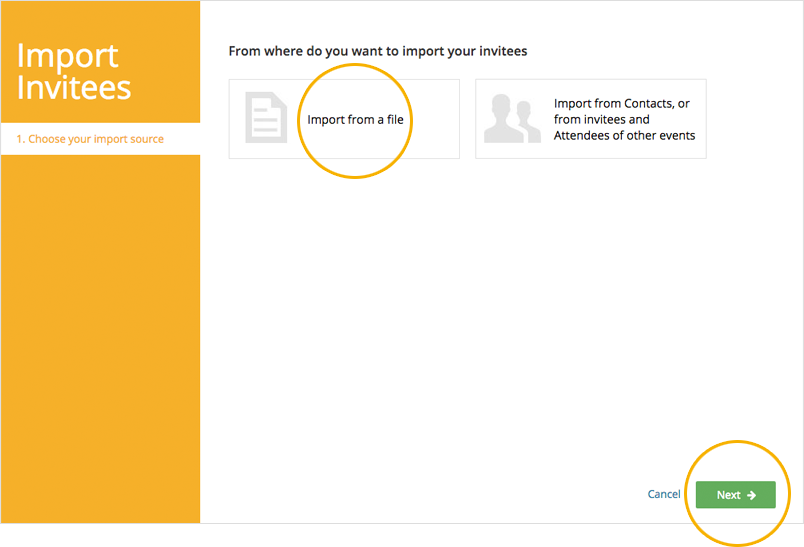 **Above image illustrates a guest list being imported from a file 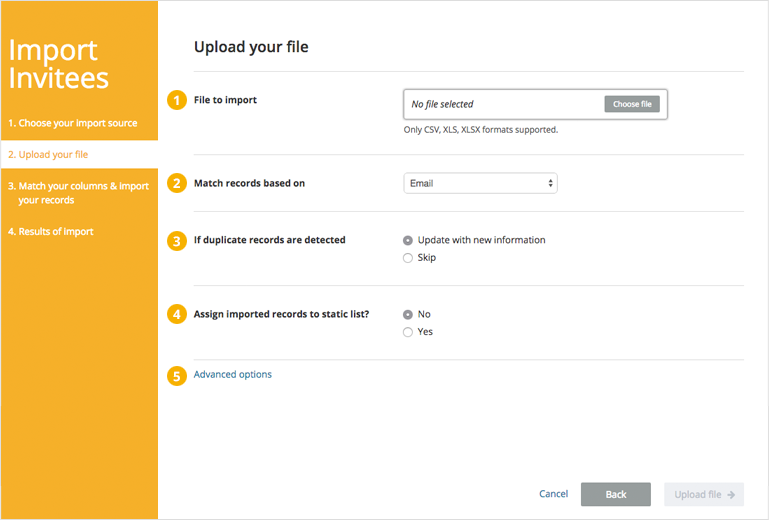 **Above image illustrates the settings before uploading your file 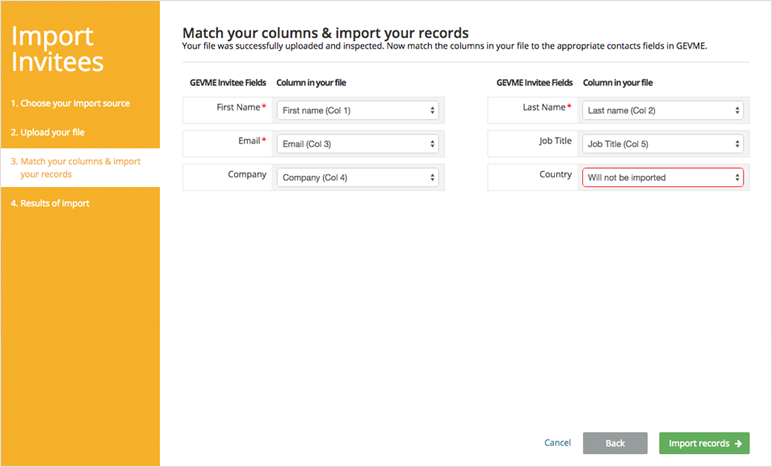 You have to go to the Invitees grid, select the invitees you want to send the invitation email to (or load a list if you have created one).

Creating a new record comes in handy especially when you have one or two guests who need to be added in the system. In this case, you don’t need to import from a file.

The Attendees Grid is where you can find all the attendees who have successfully registered for your event.

You can access the “Attendees” module by clicking on the left-hand navigation:

**Above image illustrates where to locate Attendees Module in the backend

This will open up the main Attendee screen which looks like this:

**Above image illustrates the backend view of the Attendees grid

Search options on the Grid

There are 2 ways in which you can search for records in the grid:

Depending on the data of each column, you will be presented with different search options:

If the column you are searching is of the text type, you will be presented with a dropdown which looks like the following: 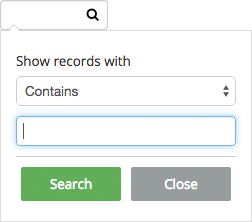 **Above image illustrates searching a Text column on the Attendees Grid

For columns that provide users with options like Dropdown lists, Radio buttons and Checkboxes, the search pop-up will contain all the options that you inserted in the Attendee Form 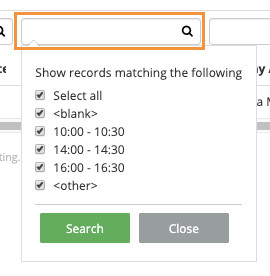 **Above image illustrates searching a Dropdown, Radio Buttons or Checkbox column on the Attendees Grid

Columns with data of the type date will show this pop-up when clicking on the search box: 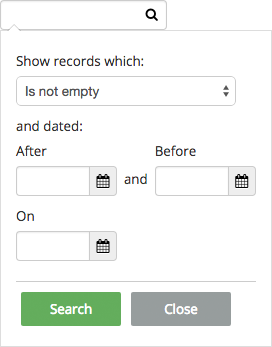 **Above image illustrates searching a Date column on the Attendees Grid

The action of selecting an individual record on the Attendee Grid will open up the Attendee Sheet of that particular attendee.

**Above image illustrates selecting an individual record on the Attendees Grid

Clicking on the Edit button under the Submitted Data tab will allow you to make the required changes and save your action. 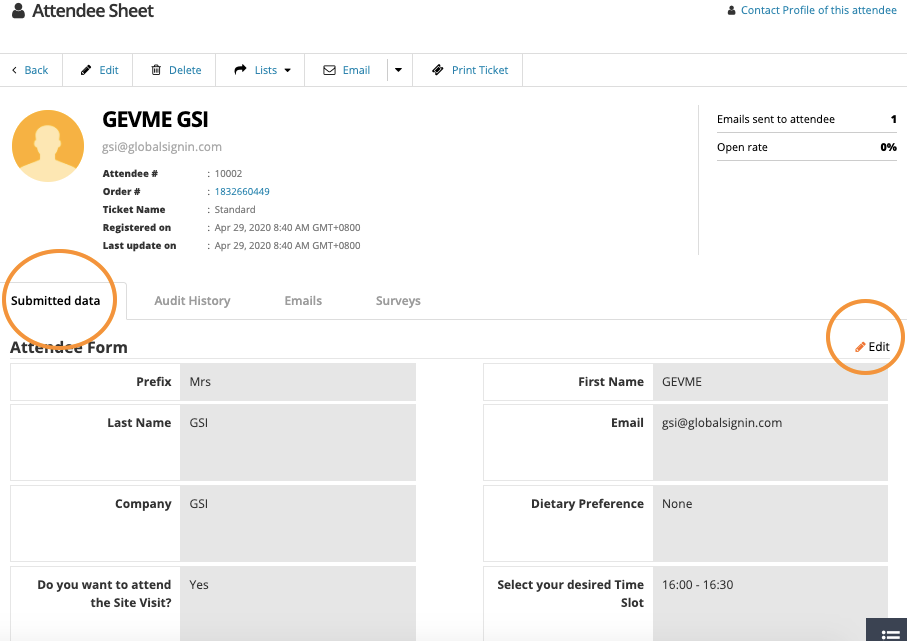 Sending Email through the Composer

Selecting the record(s) will prompt the “Email” button to display as shown below:

**Above image illustrates Email button showing upon selection of record(s)

On the composer, you can load and use an existing template. You also have the option to Attach Files which can be individually or mass sent.

Buyers and orders are critical aspects in the case of paid events. When a paid registration is submitted, an order is placed and the buyer is the person tagged to that order and the one who is therefore charged for the transaction. There are various scenarios that can happen during and after a paid event.

**Above image illustrates where to locate Orders Module in the backend

You can search for an order by looking up the name or email address of the participant who sent you the offline payment. 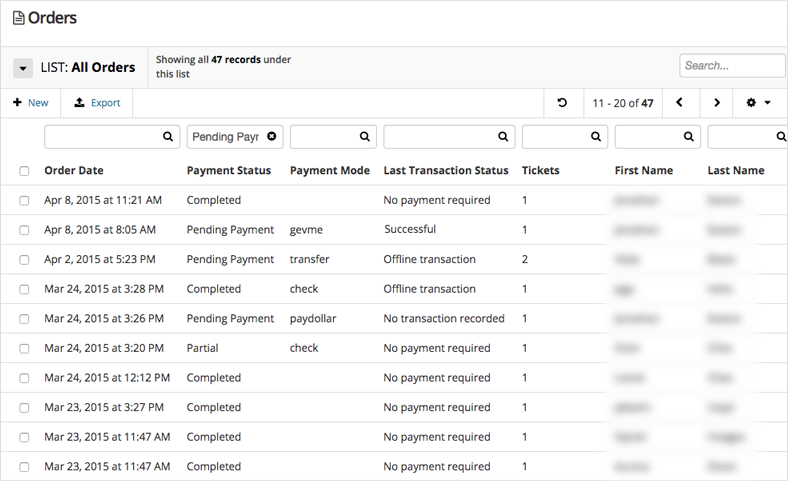 **Above image illustrates the backend view of the Orders Grid 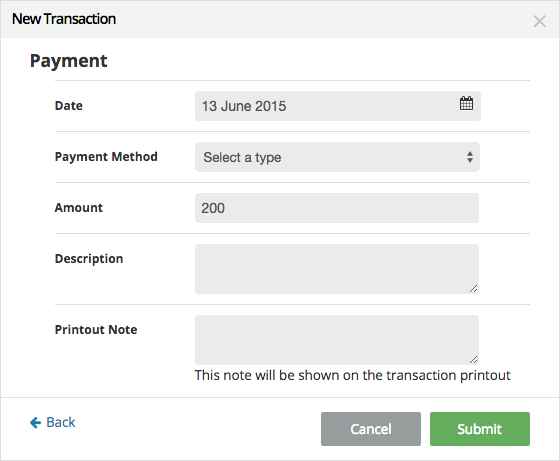 If full payment was received, a popup will appear asking if you would like to send a confirmation email to the ticket buyer and attendee(s): 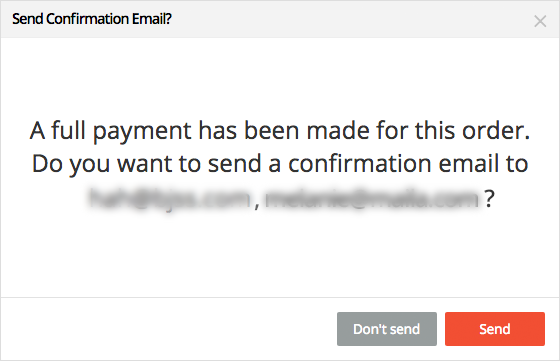 Once the payment reception transaction is recorded, the Order Details screen will be updated accordingly: 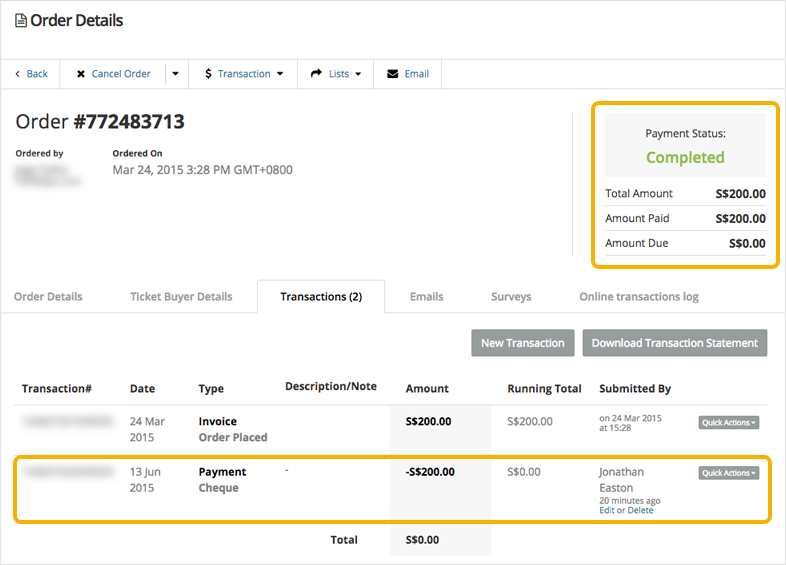 **Above image illustrates the Payment Status changed to Completed

Sometimes an attendee cannot attend an event even though a full payment has been made. He/She might get in touch with the event organiser to cancel the payment.

The action of refunding on GEVME is purely to record the transaction in the system, so bear in mind that it does not allow you to actually refund the money to the participant (that would have to be settled separately e.g. by sending them a cheque or sending them the money through bank transfer).

There are different ways on GEVME to go about refunding the additional credits back to an Attendee.

Lists are another important aspect of data management in GEVME. Lists help you organize your invitees, attendees, contacts, etc. (effectively any data which is displayed in a grid) into categories, or segments.

There are two types of lists that you can create on GEVME: 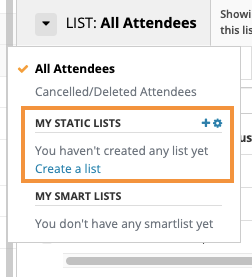 **Above image illustrates where to create a Static list

You simply need to click on the “+” button to keep creating and adding new Static Lists like so: 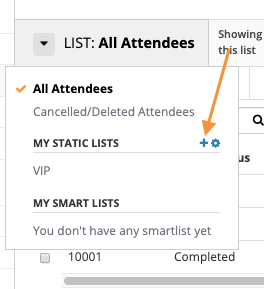 **Above image illustrates how to keep adding Static Lists

To assign one or more records to a static list:

Smart Lists are filters, or searches, used to create a list or segment. Smart lists therefore, are updated real-time upon the contact/attendee/orders fulfilling the search criteria. In that sense, smart lists can be considered as being "saved searches" which, at any point in time, consists of the records which match the criteria of the search.

To create a Smart List, simply start by doing a search. For example, to create a smart list of Attendees who bought a ticket called "Early Bird": 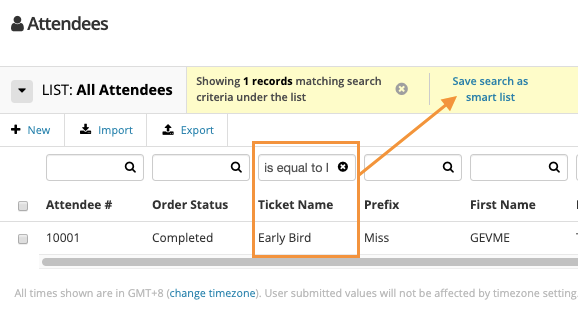 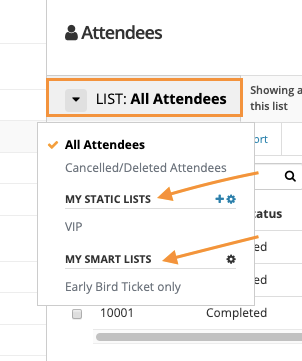 **Above image illustrates where to locate your lists (both Static & Smart)

In GEVME, an email campaign is a blast of email(s) that you send to one or more recipients. Each blast that you send is considered a campaign.

Sending emails through Campaigns is one way of sending emails in GEVME. The other way being through the Composer. Each way has its own specific purpose and is suitable for different cases.

Sending emails through Campaigns is especially suitable for cases where you want to send a "heavy" email to a lot of recipients or to multiple lists of recipients.

On the Campaigns screen, click on the Create new campaign button in the top right hand corner of your screen:

**Above image illustrates how to create a new campaign

Setting up a Campaign

Once you create a campaign, you will be presented with the Campaign Creator sections i.e Email Builder, Campaign Settings, Attachments, Send/Schedule Settings 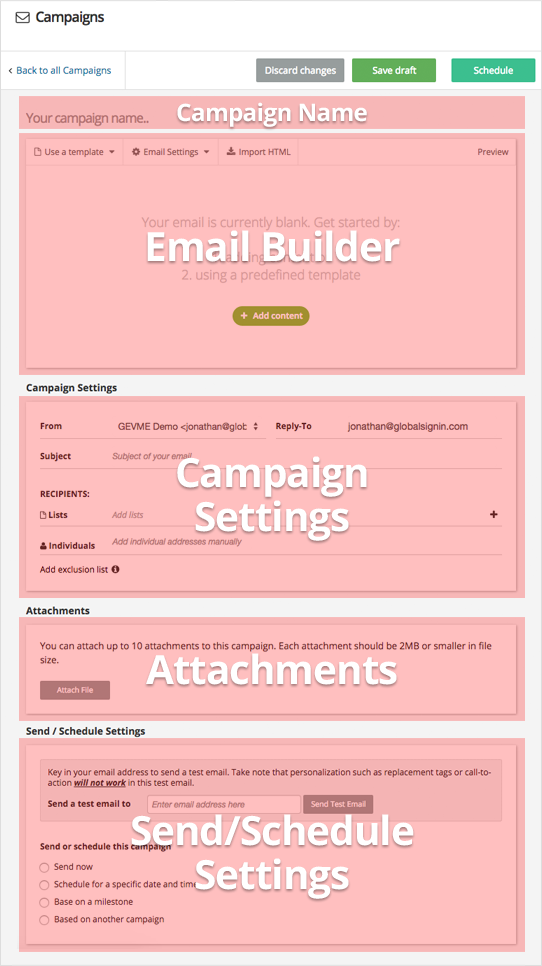 This portion is where you actually build the content of your email. In here, you have the following options:

These are the different options under Campaign Settings

**Above image illustrates the email settings of the campaign

The icons on the right allow you to perform the following actions on the scheduled campaign:

Did you find it helpful? Yes No

Send feedback
Sorry we couldn't be helpful. Help us improve this article with your feedback.